EUROJET showcased the EJ200 at the recent ADEX air show in Seoul, together with Partner Company, Rolls-Royce, with a full-size cutaway production engine on display.

EUROJET was in Republic of Korea to promote the EJ200 as the best solution for the topical KFX indigenous aircraft project. The KFX is largely considered the Republic of Korea’s largest weapon project to-date and the decision for the engine provider for the KFX platform is expected in early 2016. The EJ200 engine’s state-of-the-art technology combined with a cost-effective operational and maintenance philosophy makes it a highly competitive option in the KFX competition.

In a press conference held the week before the air show, Clemens Linden, CEO of EUROJET stated: “I am proud to confirm my personal commitment and that of the EUROJET community to the Republic of Korea’s KFX programme. We fully support Korea’s vision for indigenisation and have designed both a substantial localisation concept and an extensive Transfer of Technology package coupled with the opportunity to modify and adapt the existing EJ200 engine to meet the air force’s particular requirements.” 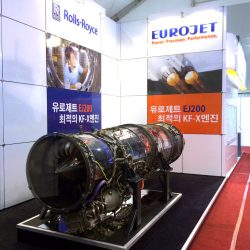 The EJ200 on display at ADEX 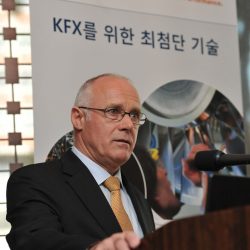 EUROJET, the consortium responsible for the EJ200 engine installed in the Eurofighter Typhoon, today signed the sixth Operational Phase contract with the NATO Eurofighter & Tornado Management Agency (NETMA) to provide continued EJ200 engine support over the next 3 years.

The contract, signed in Munich, between Air Vice Marshal Graham Farnell OBE, General Manager of NETMA, and Clemens Linden, Managing Director of EUROJET Turbo GmbH, covers engine support for the four core nations of the Eurofighter Typhoon Programme, the UK, Germany, Spain and Italy. The work will be performed in-country by the four partner companies of the EUROJET consortium, Rolls-Royce, MTU Aero Engines, ITP and Avio Aero, respectively, for their own nation’s fleet.

Commenting on the finalisation of the contract Graham Farnell stated: “This contract signature marks an important step towards the future, assuring support of the Typhoon fleets for uninterrupted operations and including savings that will underpin confidence in our ambition to continuously improve the Future Support Concept of this fantastic engine”.

Mr. Linden expounded: “We are very pleased to sign this contract, since we are entering into a new support phase of the programme with stable, but demanding operations of the Air Forces. It is shaped to cover the work which is internationally required to deliver the services to the national Customers by our partner companies as before, but it also builds a base for direct national availability service contracts of the partner companies with their respective Nation, i.e. based on the work share and the design responsibilities of our consortium every partner performs its international support tasks which are delivered via the national channel. Thus, the specialists and engineering / support capabilities of each partner is maximised to deliver international services. This provides best value for money respecting the economic demands of the Nation’s defence budgets. Moreover we were able to keep the price stable whilst the number of engine flying hours increase. Subsequently, this gives a lower support price per engine flying hour which is to the satisfaction of both parties.”

The EUROJET consortium is responsible for the management of production, support and export of the EJ200 engine system. EUROJET’s shareholders comprise Rolls-Royce (UK), MTU Aero Engines (Germany), ITP (Spain) and Avio Aero (Italy). The engine represents outstanding and innovative technology and continually demonstrates exceptional performance in the Eurofighter Typhoon. With its unprecedented performance record, combined with multi-role capability and highest availability at competitive life-cycle costs, the EJ200 engine is perfectly set to meet the air forces’ demands of today and the future.

High-resolution images of the EJ200 engine can be downloaded from our website.