EUROJET Turbo GmbH (EUROJET), the consortium responsible for the EJ200 engine installed in the Eurofighter Typhoon, has today signed a contract with the NATO Eurofighter & Tornado Management Agency (NETMA) to provide 48 new EJ200 engines for the Spanish Air Force.

The contract, signed at the ILA Berlin Air Show, between General Miguel Ángel Martín Pérez, General Manager of NETMA and Gerhard Bähr, CEO of EUROJET, covers EJ200 engines for the Eurofighter Typhoon fighter aircraft as part of Project Halcón. The aircraft will enter service on the Canary Islands, adding to the existing Spanish fleet of 70 Eurofighters.

In common with all EJ200 engines for the Spanish Air Force, final assembly of the engines will be conducted by ITP Aero at their Ajalvir facility with deliveries scheduled from 2024 onwards. Production of the engine modules will be performed by the four partner companies of the EUROJET consortium; Rolls-Royce, MTU Aero Engines, ITP Aero and Avio Aero.

On signature of the contract, Mr Bähr stated: “I would like to thank the Spanish customer for their confidence in the Eurofighter platform, the EUROJET consortium, and the performance and sustainability of the EJ200 engines. This order enhances European defence capability and simultaneously provides long-term security for a number of highly skilled jobs in the European aerospace industry.”

General Miguel Ángel Martín Pérez said: “With today’s Halcón contract signature, we conclude successfully a joint new Typhoon procurement endeavour with 48 new EJ200 engines for Spain. The moment is strategic for several reasons: to continue supporting Aerospace industry recovery after the COVID era, to serve as a clear message that the EJ200 is a reliable asset, and to reinforce NATO deterrence capabilities.”

The EUROJET consortium is responsible for the management of the EJ200 engine programme. EUROJET’s shareholders comprise Rolls-Royce (UK), MTU Aero Engines (Germany), ITP Aero (Spain) and Avio Aero (Italy). The engine represents outstanding and innovative technology and continually demonstrates its exceptional performance in the Eurofighter Typhoon. With its unprecedented performance record, combined with multi-role capability and highest availability at competitive life-cycle costs, the EJ200 engine is perfectly set to meet air force requirements, both of today and the future. Since delivery of the first production engine in 2003, over 1300 EJ200 production engines have been delivered to Air Force customer fleets of nine nations, and the EJ200 engine has achieved in excess of 1.5 million engine flying hours. 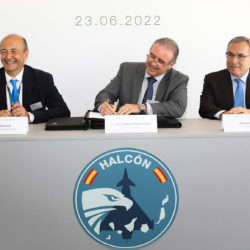